AN INTERVIEW WITH JAY JEANNOTTE: HAYMAKERS FOR HOPE CHAMPION

Haymakers for Hope is an official 501(c)(3) charity organization that raises funds for cancer research, care, awareness, and survivorship. They have successfully raised over $20 million in their fight to end cancer in their first ten years.

This organization takes very seriously what it means to “bring the fight to them,” when it comes to combating cancer. What Haymakers of Hope is infamous for are their sanctioned amateur charity boxing events. They have a history of hosting events in 4 different cities across America and attracting the participation of over 950 fighters.

Why is this important to us at Falvey Insurance Group?

On May 19th, our vice president, Jay Jeannotte, fought valiantly in his Haymakers for Hope match at the House of Blues in Boston for the eleventh installment of “Rock ‘N Rumble Boston,”.

While many of our employees know Jay, very few have known that he had undergone vigorous training for months prior to his match, at Balletto’s Athletic Training Center in Cranston, RI.

Cancer has impacted Jay and his family tragically last year. Both Jay’s father and mother were fighters in their own right, battling esophageal cancer before falling victim to the disease. The strength, courage, and resilience that both Mr. and Mrs. Jeannotte showed in their respective fights was engraved into their son and continued to motivate him every single day leading up to his fight and for the rest of his life.

The outcome of the match

On the evening of Thursday, May 19th several employees of Falvey and a crowd of over 1,800 spectators bore witness to the victory of Jay Jeannotte by unanimous decision over his opponent, Sean O’Brien at the House of Blues Boston. In addition to the triumph of his match, Jay had also been crowned the champ of donations that night, raising an astounding $72,269, with over 375 donations.

Falvey Insurance Group is so proud of Jay for his success and are in awe at the strength he has carried leading up to this match, all while continuing his excellence in the office. 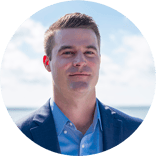 Interview with the champ

We sat down with Jay to ask him about his Haymakers for Hope experience.

What was initially going through your head after you had just won your match?

JJ: When I first won, I was so beyond exhausted that I couldn’t think straight; it didn’t really register or hit me [the win] until after the fact.

One of my first thoughts was: I am definitely never doing this again. Because it was the hardest 6 minutes of my life. It worked out better than I could have expected.

For me, it was a sense of relief. Because win or lose, everyone was there for a great cause, but winning that match for me, did mean a little more. I was really happy that it worked out that way.

While you achieved what you set out to do with Haymakers for Hope, would you consider competing in another boxing match like this one?

JJ: I can confidently say I am going to hang up the gloves when it comes to competing, but I plan to stay involved with the gym and get more boxing workouts in. I’m just retired from getting punched in the face… and punching other people in the face.

What did you think of your performance that night? Did you feel over-prepared, under-prepared, or nervous?

JJ: Leading up to the fight, I felt very prepared. I think everyone in the gym and my trainers, did everything right. I trusted them and all the work we put in. So even the day of, I really wasn’t that nervous. I was anxious, waiting around, but I did feel confident going in.

Then, right when I started getting ready for the fight itself, warming up in the hallway, I was just flooded with nerves.

My team and I had a game plan going in, but that went out the window in the first 10-15 seconds. Nerves for me and him [my opponent], were through the roof at that point. It kind of took a little while to settle in, but I can confidently say that at no point in that 6 minutes was I 100% calm and settled.

I felt like I was doing a good job in there. I felt like I definitely won the first two rounds. But at the end of the day, you never know.

Overall, with my performance in general, I was pleased. For the first time doing it and truly having no idea what to expect, I don’t think it could have worked out any better. It was a great back-and-forth fight. My opponent, he’s a great guy too, so I’m glad it worked out that way!

With over $72,000 in donations raised, what does it mean for you to be both the highest donated fighter and the most donated to fighter that night?

JJ: That meant more to me than anything else. Going into this, I’ve never had to fundraise for anything of this magnitude, so I wasn’t really sure what to expect. It was really instant, from the second I announced back in January, to see the donations flood in as well as the love and support from friends and family, as well as everyone here at Falvey. It was honestly overwhelming.

I went in this [the boxing match], with the mindset, that if we’re going to do this, let’s go win the fundraising as well.

I couldn’t be more grateful for everyone around me. It wasn’t just their financial support, but seeing everyone’s genuine excitement and desire to stay involved and get updates with everything over the last couple of months, was truly life-changing.

Overall, it was one of the best things I’ve ever done, and I really couldn’t have done that without everyone’s support.

Participating in Haymakers for Hope in honor of your parents is undeniably emotional. How did it factor into preparing for and fighting in the match?

JJ: Thinking of them on a daily basis, a lot of times, that’s what got me to the gym.

It was a long couple of months. A lot of times you feel like you’re just plateauing and there are days you’re just tired, especially after a long workday. It was thinking of them and why I am doing this. Also thinking of everyone’s support, and saying “I’m not going to let these people down.” This extra motivation factor that I had, definitely carried me through.

Especially the last 3 weeks of training, which was hell. It was a time when I felt like I didn’t have anything left in the tank and wanted to give up. I would think of them.

My trainer would even remind me, saying “remember why you’re doing this.” I definitely was able to kick it into this extra gear that I didn’t even know I had and got through.

Learn more about Haymakers of Hope and their upcoming events: https://haymakersforhope.org/

FALVEY SHIPPERS INSURANCE
is a subsidiary of
Falvey Insurance Group.